The inlaid opal bracelet is a fashion item that is back in style agian. This is because it really was a style of setting opals that is equated with mid-century jewelry styles.   The inlaid styles first started appearing at the turn of the last century during the Victorian area.  It was also part of the Art Deco movement.  Inlaid styles featuring slabs of pearlescent opal were also seen quite frequently as part of both costume and precious jewelry styles in the fifties, sixties and seventies.

The inlaid style mixes a casual cachet of wood, jet or inlay with the slightly expensive look of opal. It’s quite a hip look to wear one because it is so multi-cultural.  In fact lmost every culture has a version of the opal inlay cuff bracelet. In China, white opals are set into heavy black cuffs or red lacquered wood.  In India you will find many varieties of the inlaid opal bracelet including those that are inlaid and alternated with another stone such as hematite or jet and those that are inlaid in bracelets of gold.   The Mexican version of the opal inlay cuff bracelet comes in copper, silver and exotic South American woods.

The design of an inlaid opal bracelet can be quite intricate or very simple. A common simple Chinese design is a series of inlaid opal triangles into a lacquered bangle. Some Indian designs are very much influenced by the British Empire’s love of everything Victorian. Even today you can still find the opal inlay cuff bracelet adorned with the traditional Victorian flower blossoms and butterflies and beautiful little filgeree designs.

More mod versions of these bracelets appeared in the sixties.  You could find jet and opal styles interlaced in geometric shapes that fit around the wrist. Often the opal is inlaid with semi-precious metals like brass or nickel.

The highest quality inlaid opal bracelet comes the Southern United States, Mexico or Brazil where the opals are more likely to be set in solid silver. The cheapest bracelets come from India and China where they bracelets are mass manufactured and the designs often appear a bit off center.  This is particularly true of the opal inlay cuff bracelet that is made from compressed wood.  Still even the more poorly made inlaid opal bracelets are quite beautiful, even if they are bit flawed.  If they are older examples of the an inlaid opal piece they can also be quite beautiful. 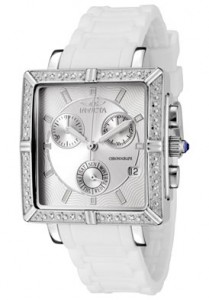 Here is a very cool watch you can get for your girlfriend for Valentine’s Day. This is a classic women’s chronograph provides a dressy look with its diamond accented bezel and silver dial. The watch looks expensive and she can show everyone what a great gift you gave her for Valentine’s, she will absolutely love it, and it’s the perfect gift for someone very special to you. It has white diamond white rubber is brand new, this is sure to be every women’s favorite accessory. Click here to visit the store.