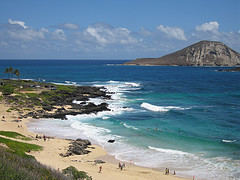 I visited Hawaii about 2 years ago with my boyfriend, since I was a kid I always wanted to go to Hawaii, I used to watch pictures of Hawaii or see it on TV but that was about it.   We finally decided to explore these beautiful Islands, we went through a travel agency which it wasn’t the best thing to do, because when we arrived at the airport in Honolulu we didn’t know what to expect.  The agency sent us a heavy white woman to welcome us at the airport nothing like I imagined when I was a kid, my conception was to have a pretty, young, woman greet us at the airport.

We got there at night and drove to Waikiki one of the most popular vacation destinations in the World, as we were coming close to the city, the place felt so alive music everywhere you go.  I never went to any gathering where the music was not heard.  It was part of the Island life.  It’s beautiful and so much joy.  A short drive out of town in any direction will bring you face to face with uncrowded beaches and gorgeous views.  Every room was just two or three blocks away from the sea, the calm waters of Waikiki are perfect for surfing lessons. And the fun keeps going long after the Waikiki sunset with amazing nightlife and fun music.

Driving in Waikiki is not such a great idea the streets are constantly busy, this city is one of largest cities and has one of the largest population in Hawaii.  So, we decided to park the car at the hotel and explore the city walking.  The next morning we had a complimentary pickup that was offer from our Waikiki hotel and took us to one of the best tours Pearl Harbor.  We had the opportunity to entertain our self inside the museum; I did some shopping at the souvenir store as well as watch a historical film depicting the events of the December 7, 1941 Japanese attack on Pearl Harbor.  We also board the ferryboat to the Arizona Memorial, which is constructed over the sunken hull of the battleship USS Arizona and honors the crewmen who lost their lives during the attack. It’s a meaningful experience that gives you a window to the events that drew us into World War II.

In the afternoon we decided to drive to the North shore to a place called Kualoa Ranch, driving down the north shore is a dream come true, your heart will skip a beat.  Hawaii will do that to you over and over again.  Kualoa Ranch is another great attraction; the ranch views will become very familiar as you explore these sites.  This is where many television shows and Hollywood movies were film such as Jurassic park, Windtalkers, Pearl Harbor, Godzilla, Tears of the Sun and 50 First Dates. TV shows include Hawaii Five-O, Magnun P.I. and, most recently, the hit show LOST.